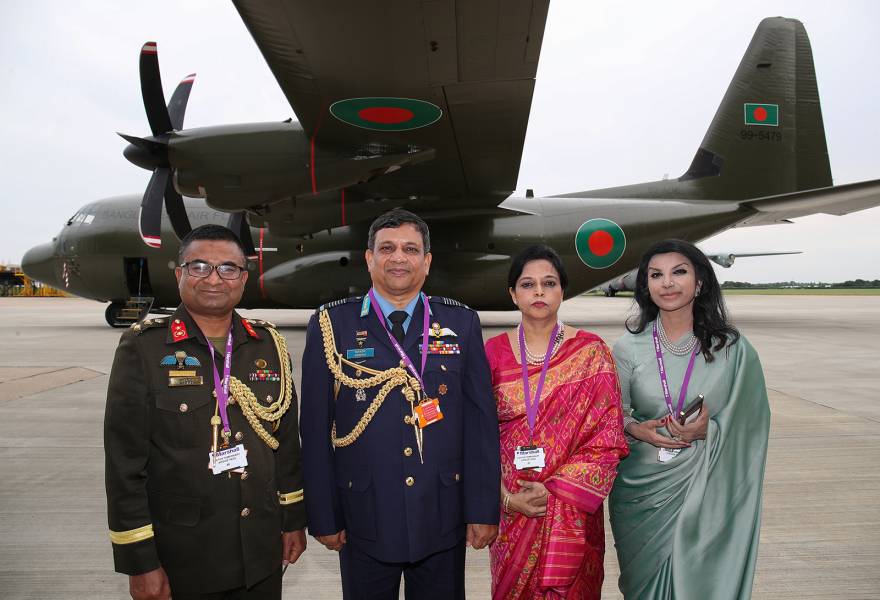 Marshall Aerospace and Defence Group rolled out the first of a number of C-130J Hercules aircraft it is preparing for delivery to the Bangladesh Air Force, during an official ceremony last week.

Air Chief Marshal Masihuzzaman Serniabat (second left), Chief of Air Staff of the Bangladesh Air Force, saluted the aircraft to the sound of the nation’s national anthem in what was an important day for the Air Force.

The ceremony was also attended by Sir Michael Marshall and Marshall Aerospace and Defence Group CEO, Alistair McPhee, along with Bangladesh High Commissioner to London, Her Excellency Ms. Saida Muna Tasneem and members of the Bangladesh military.

“It filled me with pride to witness the Bangladesh Air Force’s very first C-130J aircraft being rolled out for Air Chief Marshal Serniabat and other important guests,

“I know our engineers greatly valued his visit and the thanks he gave them for the work they have done getting this first aircraft ready.”

Some of the other C-130Js the Bangladesh Air Force recently purchased from the UK Ministry of Defence were also on view. Marshall is carrying out comprehensive depth maintenance and important modifications on all the aircraft including capability enhancements such as MEDEVAC, avionic upgrades and the provision of a Passenger Transport Configuration.

“This is such a proud moment for the Bangladesh Air Force. The roll out of our first C-130J aircraft here in Cambridge is a landmark occasion and we look forward to welcoming the aircraft soon in Bangladesh. I’d like to thank all the team from Marshall that have worked so hard to achieve this significant milestone.”

Air Chief Marshal Serniabat and other Bangladesh dignitaries also took the opportunity to view the interior of the aircraft.