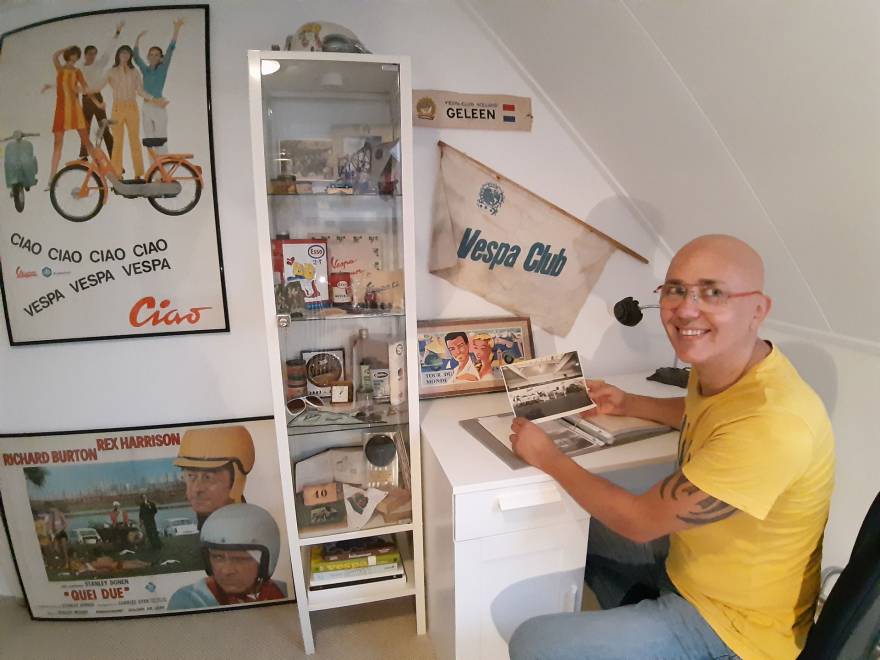 To celebrate National Careers Week this year, we wanted to share a story from our incredibly dedicated and diverse range of employees who understand the importance of balancing their professions with unique hobbies and interests.

We were thrilled to hear that there’s a hoot on a scoot making his way around Marshall in the Netherlands, utilising skills gained in the workplace and putting them into action at home.

Chris van de Boom joined us in April 2019 as a Field Service Manager at Eindhoven Airbase in the Netherlands, working on The Royal Netherlands Air Force’s (RNLAF) fleet of C-130s. We’ve been supporting RNLAF for more than 25 years and currently have a total sustainment contract to support their C-130H fleet until 2032.

Chris is recognised by colleagues and peers as a passionate and dedicated Vespa enthusiast, the world’s most iconic brand of scooter, manufactured by Piaggio since 1946. He is often seen riding to work on one of his incredibly rare scooters, which has received plenty of attention from many motor magazines and Vespa aficionados around Europe.

His love for the brand started at 16 years old, when they released a brand new but classically designed scooter. Unfortunately for him and as many young people find, he couldn’t afford it at the time and he settled for a different bike, yet his passion for the nostalgic model remained.

Chris told us about his involvement in the Vespa world:

“I’ve had 10 different Vespa’s in my lifetime and have enjoyed performing small modifications or completely stripping them down and restoring them in my spare time.

"I have a background as a metal worker and so the work I’ve done differs from making metal parts and accessories, to bringing back the Vespa in original conditioning and removing the resprayed layer. Sometimes, this needs to be done with surgical precision using a scalpel to keep the original paint and value, which is extremely time consuming work.

"Some Vespa’s are so rare that it is difficult to find spare parts for them. Building up an network in Italy with other enthusiasts is very important for me and I spend a lot of time searching in Italy for these specific parts.

"In the last 2 years, I’ve sold a couple of my bikes to allow me to finance one specific model of Vespa that dates back to 1953. Once I finish restoring, the bike will be museum worthy when ready!

"I’m always searching for Vespa memorabilia and trying to investigate the history of Vespa traditions within the Netherlands. I’ve even spoken to several Vespa enthusiast in their 90’s! They’ve provided me with pictures and told me numerous stories about the history which I confirm by examining online databases, newspapers and reading old club magazines to help piece it all together. Through my research, I’ve also managed to reunited Vespa friends who’ve lost contact for more than 45 years and that’s a fantastic feeling.”

Chris’ work has been recognised by many magazines and has appeared in numerous articles and interviews outlining the role he plays in the world of the Vespa. A monthly Dutch magazine called ‘Scooter & Bike Express’ interviewed Chris about one of his extremely rare models from the 1980’s, where only 450 units were produced.

Unfortunately, this particular model was renowned for being so ugly that Vespa struggled to sell it and that was the basis behind the article! However, after this article was written, they soon recognised the immense knowledge Chris has and asked him to write an article on a monthly basis for their magazine. Chris wrote his first four-page article in January 2021 which has been received extremely well.

After a year of lockdown and numerous cancelled events, Chris is excited to be back on the bike as he heads out to Austria to join the famous Grossglockner Bergpreis Rally in June 2021. The Grossglockner Races were originally hill climbs for automobiles and motorcycles held in 1935, 1938 and 1939 on the Grossglockner High Alpine Road crossing the Central Eastern Alps in Austria.

These legendary races have inspired those with a shared enjoyment of the 1950’s style Vespa to take to the alps on their own. Over recent years this event has taken place across Italy, Germany, Austria and Switzerland with Vespa enthusiasts from all over Europe being able to ride and view some of the world’s most magnificent landscapes.

We hope that Chris continues to share his wonderful hobby and gives others the inspiration needed to utilise the skills developed from their careers in STEM into their home life.