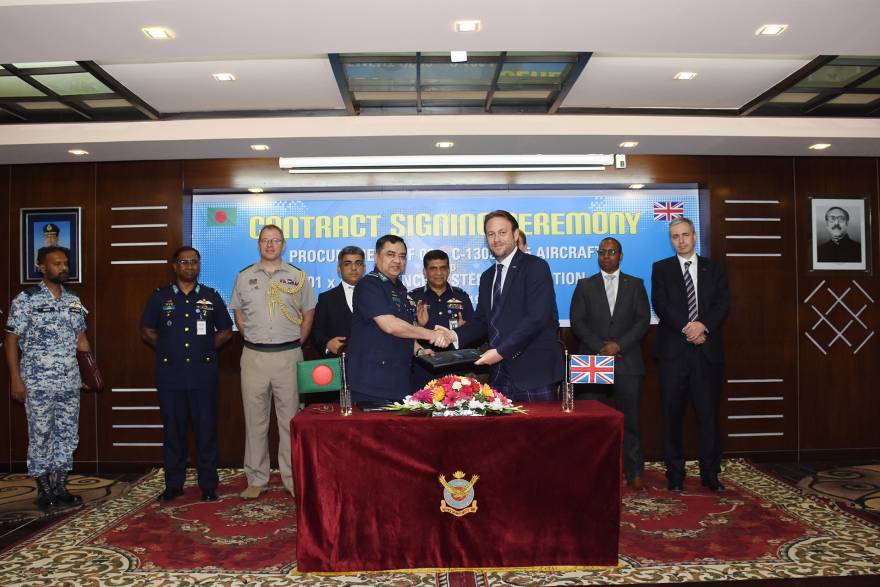 Marshall Aerospace and Defence Group has signed a new multi-million-pound contract with the Bangladesh Air Force to support additional C-130J aircraft purchased from the UK Ministry of Defence.

This new multi-year contract follows on from the landmark contract signed in May 2018 and will see Marshall provide total support to the entire Bangladesh Air Force C-130J fleet. Marshall will deliver aircraft maintenance, logistics support, including the provision of spare parts and ground support equipment for establishing local capabilities, as well as engineering services to ensure the effective operation of the entire fleet.

The company will also carry out critical capability enhancement modifications to the avionics equipment and provide a passenger transport capability, as well as in-country technical support to the operator for an initial period, along with specific technical services to support the longer-term sustainment of the fleet.

This new support contract has been signed in accordance with a Government-to-Government agreement for the sale of an additional batch of former Royal Air Force C-130J aircraft from the UK MoD to the Bangladesh Air Force.

“We are delighted to see the Bangladesh Air Force further strengthen its important airlift capability with the purchase of additional C-130Js from the MoD and are proud to support them with their fleet’s entry into service.

“The Bangladesh Air Force can fully rely on Marshall to support them as they continue to play such an important role in UN peace-keeping and humanitarian missions around the world.”

The contract was signed today during a ceremony held at the Bangladesh Air Headquarters in Dhaka in the presence of representatives from both the Bangladesh and British Governments, including the MoD’s Defence Equipment Sales Authority.

Speaking at the ceremony, a Bangladesh Air Force Representative, said:

“Marshall will play a key role in ensuring that our C-130J fleet is available to enable us to fulfil our operational commitments. We need them to make the missions possible.

“The relationships we have with the Royal Air Force and UK MoD are of the utmost importance to our nation and we also look forward to further strengthening our industrial relations with the United Kingdom.”

“I am delighted to see today’s event build on the success story that is the growing UK-Bangladesh defence relationship.

“Our two countries are committed to an ever-deeper partnership across the full spectrum of security activity, including disaster response and UN peace-keeping. These aircraft are an excellent demonstration of this cooperation. We also recognise the important role of Marshall Aerospace and Defence Group as the UK Government’s industrial partner in supporting both countries with their global commitments.”