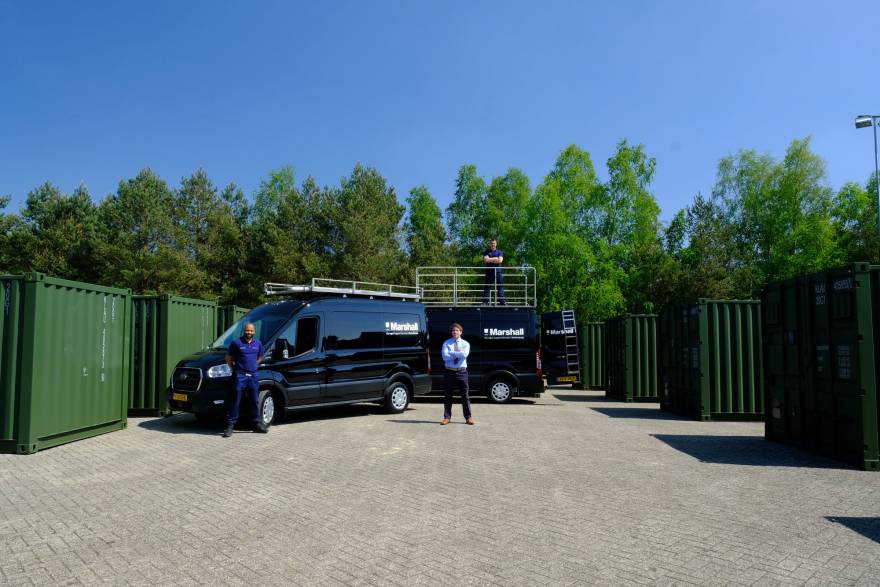 Marshall Aerospace and Defence Group (MADG) continues to grow its presence in the Netherlands with the arrival of two new support vehicles for its DVOW contract with the Dutch Defence Materiel Organisation (DMO).

The two Ford commercial vehicles arrived at the company’s Dutch base in Leiden recently to support the field service engineers fulfilling the contract’s maintenance obligations.

The 250th container is about to be dispatched from the MADG’s manufacturing facility in Cambridge, on route for The Netherlands.

The contract has two elements, the production and delivery of containers, including command and control, medical systems, workshops and basic stores units, plus a full support programme with Health and Usage Monitoring (HUMS) and a Fleet Management System, that includes ongoing and regular maintenance.

Besides the performance-based maintenance programme, Marshall Managed Support Services Netherlands will support the Dutch Ministry of Defence with training, spare parts and specialised tooling, and a range of services on request to ensure the effectiveness of end users of the container systems.

“These two vehicles are the first of a number that we have planned, to help us fulfil our maintenance and through-life support of the DVOW contract.

“We about to dispatch our 250th container system and we will continue to add support personnel and equipment as numbers increase.

“Our field service engineers travel to wherever the containers are deployed, throughout the Netherlands and overseas and we plan to increase their number, and support equipment, including transport, in the next couple of years.”

The very first containers were delivered in July 2019, just seven months after the contract was awarded and these will commence their first annual maintenance schedule this July.

As well as additional dedicated engineers and office-based support personnel, the company also plans to extend its office and maintenance base in Leiden to increase its workshop and parts storage facility and to provide additional space to increase its armed force’s operation training programme.