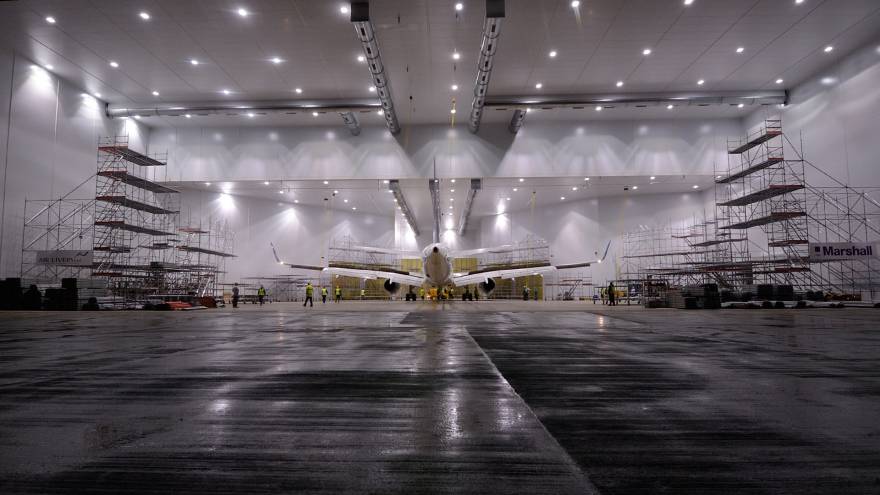 Marshall Aerospace and Defence Group will cut the carbon footprint of its paint shop by more than 40 per cent by upgrading its burner system at a cost of nearly £130,000.

CO2 emissions will be cut from 2100 tonnes to 1200 tonnes per year by fitting additional ceramic in its Regenerative Thermal Oxidiser (RTO) that removes odours and fumes from its aircraft painting facility.

The upgrade to the RTO is part of a large Continuous Improvement programme Marshall has implemented to set the highest standards in environmental sustainability, safety and financial efficiency across the business.

“Our RTO is already highly effective, but we identified a way to reduce our environmental impact even further, which is obviously the right thing to do, for our neighbours and the planet as a whole,”

This additional investment follows on-going analysis of energy usage since a huge £5.5m upgrade by Marshall four years ago, which included moving the paint shop to a new location at the airport, doubling the height of its chimney and installing a state-of-the-art RTO, already making it one of the most environmentally-effective paint shops in Cambridgeshire.

Marshall’s main paint bay is large enough to house a Boeing 747 and is believed to be one of the largest in Europe.

“We’ll be saving the equivalent CO2 as emitted by more than 120 homes, and that is significant. No one will see any difference, but just knowing we are doing the right thing for the environment is enough,”

Marshall uses the paint shop to finish the numerous repaired, modified or overhauled aircraft for the RAF, foreign military and civil customers.

The new ceramic will be fitted in July. The installation also enables Marshall to turn off the RTO when not in use, which could also potentially save the company a further 30 per cent in running costs.